Add your review
44
Product is rated as #13 in category Electric
8.5

*As an Amazon Associate, I earn money from qualifying purchases at no cost to you. This doesn't affect my opinions or recommendations.

The AR Blue Clean AR383SS is a relatively inexpensive light-duty, electric pressure washer that is a great option for most residential cleaning jobs such as cleaning siding, decks, and sidewalks.

The Annovi Reverberi AR383SS is a lightweight, easy-to-handle pressure washer that is great for most residential cleaning projects. It requires minor assembly out of the box but is easy to main afterward.

The unit comes with four different nozzles including a low-pressure soap spray, a rotary/turbo, 0°, and 25°. The AR383SS also has a 28 oz detergent tank in the back and a swivel hose connector for improved mobility.

This AR383SS review will go over key specifications, how the model compares to similarly-priced models, and important pros and cons to help you decide if it is right for you.

Delivering 1900 PSI and 1.3 GPM, the AR383SS can be used for most light-to-medium jobs such as washing vehicles, decks, and fences. Compared to other light-duty units, the value of this AR Blue Clean washer is average (as determined by cleaning power divided by cost).

Most customers report that the AR383SS’ power is sufficient for all cleaning projects including lawn equipment, siding, cars, and more.

The AR383SS has an onboard tank for detergent if you need something more powerful than water for your cleaning. To use it, just remove the container in the back, fill it with the correct ratio of water and detergent, and pull the siphoning tube through the cap so it pulls in the detergent.

Compared to other light-duty units, the AR383SS is pretty large, but I still consider it a relatively compact pressure washer. It is just under 3 feet tall and also weighs more than comparable models. Despite this, there is a handle and rear wheels that make transporting the washer easy.

Its design resembles a carry-on luggage bag with a handle and wheels. There is also a hose reel mounted between the handle and the main body that can make collecting and storing the hose easier. There are also slots for the four nozzles on the back of the unit for easy storage.

The steel washing wand is mounted to one side, and the GFCI power cord is on the other, wrapped around adjustable arms for easy removal. The detergent tank is at the bottom of the rear of the machine.

The AR3833SS is a relatively quiet power washer, especially compared to gas-powered machines. Customers report that the noise level is bearable, with many actually reporting the quiet noise as one of the biggest benefits.

What Comes in the Box

Aside from the main unit, the AR383SS also comes with the following:

The AR Blue Clean AR383SS has a one-year bumper-to-bumper warranty. This includes the high-pressure hose, spray gun, and all accessories from the date of purchase. If anything goes wrong, simply contact Annovi Reverberi and they’ll help you with your issue. 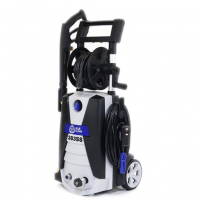 The AR383SS requires some assembly before it is ready for use. To learn how it works, check out the second video in the video section below or read on to see the necessary steps.

Steps required for assembling the AR383SS:

Once assembled, attach the appropriate nozzle based on what you are cleaning (see the following table). Fill the detergent tank, if needed, and turn the power switch on. It will turn on for 1-2 seconds; this is normal for the auto-start feature. After that, simply squeeze the spray gun trigger to wash.

The following list shows which nozzle should be used in which situation:

When using detergent, fill the tank with the proper cleaner-to-water ratio according to instructions on the container. DO NOT use thick gel-like detergents as these may clog the washer.

If the AR Blue Clean AR383SS isn’t right for you, there are many alternatives to consider. Here are some of our top choices by category.

If you are set on an electric pressure washer but aren’t sold on the AR Blue Clean AR383SS, here are some alternatives you may want to consider:

If you want more power than the AR383SS delivers, you may also want to consider a gas unit. Though they are more expensive, they deliver much more cleaning power than electric units and don’t need to be plugged in. Here are some units you may want to consider:

There are no reviews yet.

Add to compare
About Us
Pressure Washer Roundup is your source for pressure washer reviews and information. We let you easily compare pressure washers to find the option that works the best for you.
Disclosure

As an Amazon Associate, I earn money from qualifying purchases at no cost to you. If you click certain links on my site, I may get a commission.